On November 26, General Motors made an announcement of plant closings and planned layoffs that could have been a cold splash of water on the economic fire. The stock market responded by jumping almost 400 points. The GM announcement was consistent with how U.S. car companies are expected to respond to the massive changes in the automotive industry, and it was also likely a political reply to the tariffs that have added $700 million to the carmaker’s costs. Other manufacturers are expected to follow suit to some degree.

Although GM’s plans aren’t a response to a slowing economy, the closings and layoffs are another small crack in the veneer of the U.S. economy. As business investment slows, the stock market appears to have peaked, and the stimulus from the Tax Cuts and Jobs Act wears off, there are more challenges to the economy in 2019 than in a decade. Even the bullish Federal Reserve Bank has begun to have discussions of dialing back its quarterly rate increases in the second half of next year. 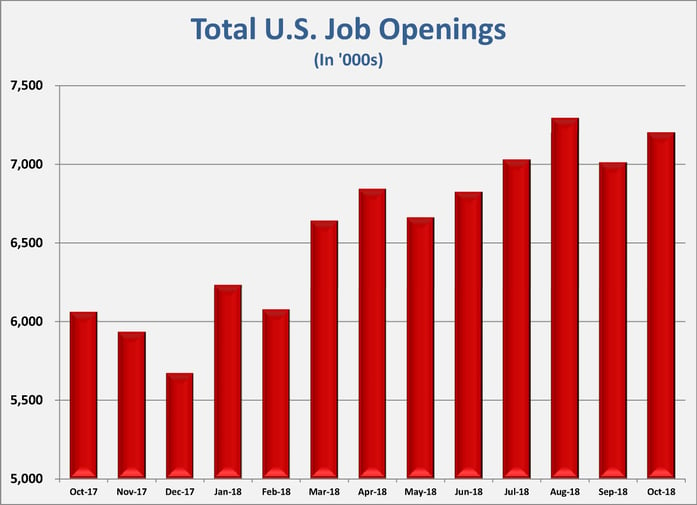 As 2018 ended, however, there was little evidence that the U.S. economy was limping into the coming year.

The broadest measure of the economy, gross domestic product growth (GDP), came in at 3.5 percent higher in the third quarter, according to the Bureau of Economic Analysis (BEA) final estimate on November 28. That GDP growth followed a 4.2 percent jump from the first to second quarter of 2018. The forecast by the BEA and the Fed for the full year is for GDP to be 3.1 percent higher in 2018 than in 2017. Even with expectations of a slowing economy built into its 2019 forecast, the Fed is expecting GDP growth in 2019 to be 2.8 percent. 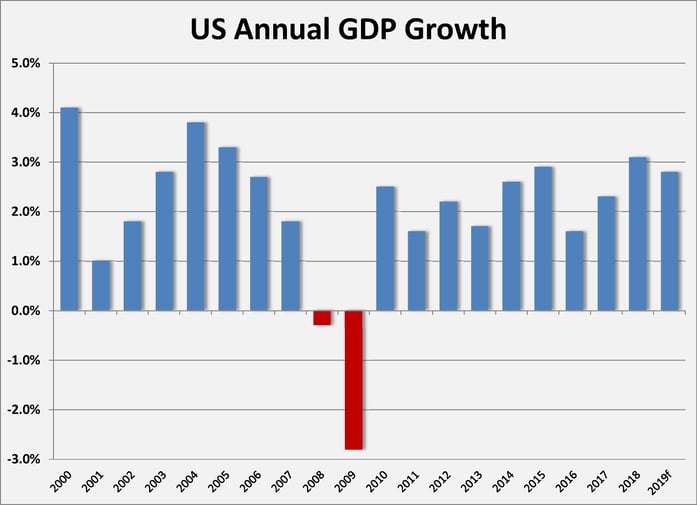 Thus far, the potential for growth in the U.S. economy remains stronger than the potential for the tight labor supply to slow output. Reports on inflation by the Bureau of Labor Statistics (BLS) have shown a more persistent increase in wages year-over-year in the second half of 2018, with wages for the average workers rising 3.1 percent in the most recent month to $27.30 per hour. Construction wages were more than ten percent higher, rising to $30.21 per hour in October.

November’s Employment Situation Summary by the Bureau of Labor Statistics, issued on December 7, showed that the U.S. labor market remains unusually strong. While the headline of 155,000 jobs was off from what economists were expecting, the overall data on the employment situation was positive. In addition to the growing wages, workers saw a slight decrease in hours. Workforce participation and total unemployed was even with October’s data. Unemployment was steady at 3.7 percent. Taken in concert with the November Job Openings and Labor Turnover Survey, the number of open positions still exceeds those looking for work by one million.

Economists expect that the pace of hiring will slow significantly in 2019, with estimates of between 120,000 and 140,000 new jobs monthly. Those levels of hiring would essentially maintain employment equilibrium, meaning that unemployment would not increase or decline. That forecast makes sense given the length of the economic expansion that has unfolded; however, it’s worth noting that the same economists expected hiring to be roughly 20 percent lower in 2018. Regardless of the strength of the economy, the most recent Beige Book from the Fed suggests that the exhaustion of the labor pool will limit hiring in 2019. Nearly three times as many employers cited the lack of skilled labor (62 percent) as a constraint on hiring than either cost cutting or rising/uncertain healthcare expense. 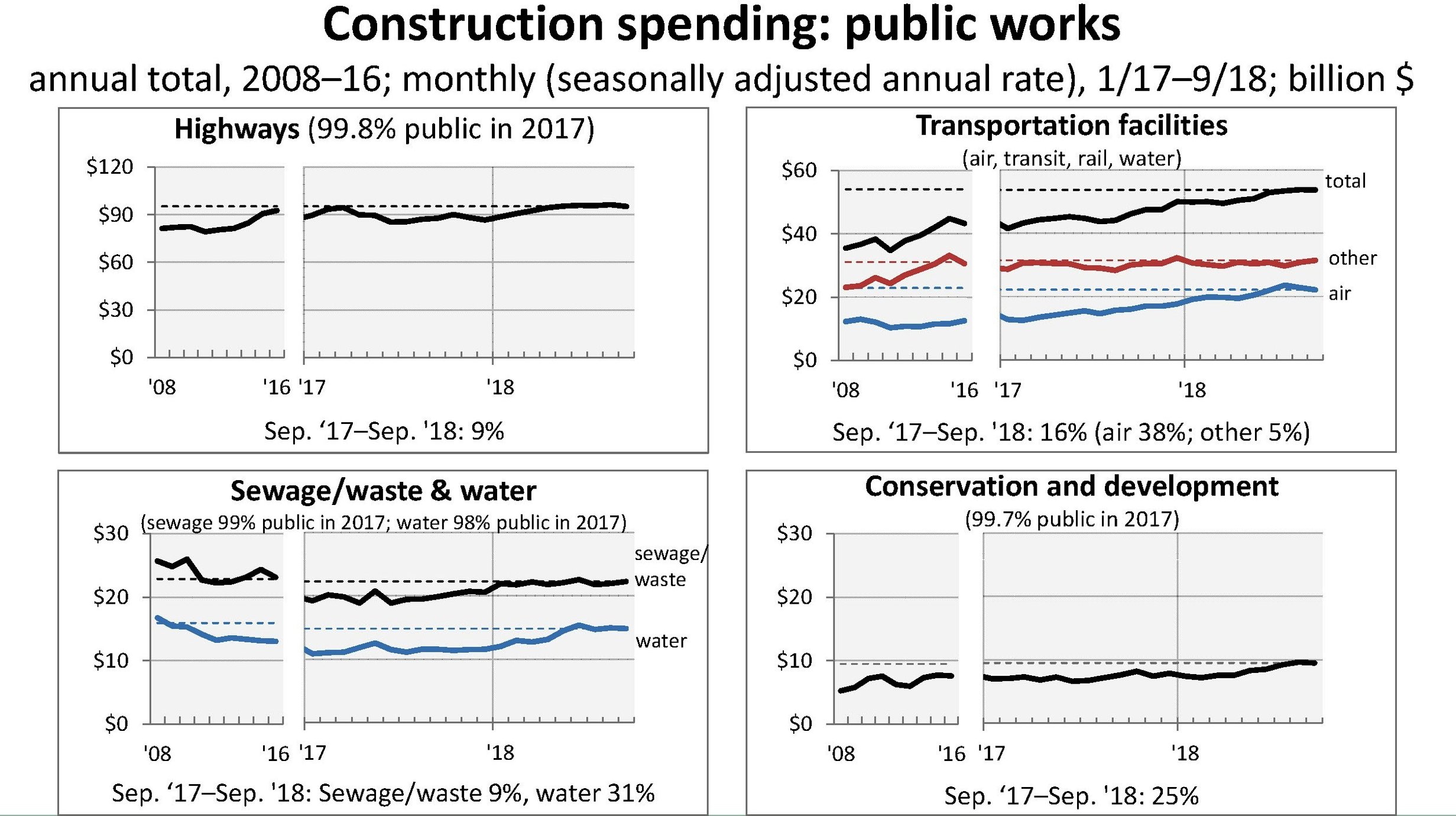 Construction activity will not be a source of relief for the workforce shortage in 2019. Economists serving the construction industry expect that there will be volume similar to 2018 in the coming year. Several observers see the total amount of square footage declining slightly in 2019, but also see higher construction inflation offsetting that decline. The forecast of less demand for new space is a function of the assumption that 2019 will bring a slowdown in economic activity and job creation.

ConstructionConnect’s economist, Alex Carrick, focused on the potential economic impact of the Democratic majority in the House of Representatives in his November 15 presentation with the American Institute of Architects’ (AIA) Kermit Baker and the Associated General Contractors’ Kenneth Simonson. Carrick saw opportunity for agreement on infrastructure spending between the White House and Congress that could lead to long overdue increases in federal investment in highways and bridges. He also noted that an agreement on a middle-class tax cut could support strong consumer spending in 2019. Carrick was cautious about the prospects for either of these developments in light of the deficit spending and the expected difficulty in reconciling a federal budget.

AIA’s Baker forecasted that total non-residential construction would be four percent higher in 2019, with gains in institutional and industrial buildings offsetting weaker growth in commercial construction activity. Like Carrick, Baker warned of the political difficulties in passage of the new U.S./Mexico/Canada trade agreement and budget stalemates that could potentially shut down the government for a time. He also cautioned that architects were beginning to see growth in billings flatten out after two years of nearly continuous growth.

Simonson predicted that non-residential spending would rise between two and five percent in 2019. Unlike his colleagues, Simonson sees the majority of the increased spending coming from infrastructure, transportation facilities, and increased investment in power and energy. He pointed out that the coming investment in 5G technology could boost telecommunications construction. Simonson expressed concern that U.S. trade policies would push costs higher and dampen demand, and that rising interest rates could do the same (especially for housing and commercial properties). He shared the AGC’s worry that a shortage of skilled construction workers would hinder contractors’ ability put construction in place.

While the U.S. economy may be showing fatigue ten years into a growth cycle, the outlook for many of the global markets in 2019 is for a reversal of growth trends that have been much shorter in duration.

It has been several years since U.S. companies had to plan for operating in a declining global marketplace. The fiscal stress caused by the financial crisis lingered for years in Europe after the U.S. had recovered, but European and Asian countries had contributed to global GDP growth for the past five years. That trend is beginning to erode. In the third quarter, the German economy contracted for the first time since the 2009 recession trough. China’s growth has begun to tick higher again but most emerging economies have seen markets become more challenging. With slower economies, the fiscal woes of Italy and Greece have resurfaced. And the growing political chaos in Great Britain has raised concerns that its exit from the European Union (EU) next spring will spark a severe recession.

Negotiations for a smooth Brexit hit a crisis point in late November, causing the governor of the Bank of England, Mark Carney, to express concerns that a no-deal exit from the EU would bring a supply-side recession similar to the 1970s. The lack of a trade agreement for Britain’s exiting the EU would leave countless British businesses floundering for raw materials and inventory. As of Thanksgiving week, many British multi-national companies were pre-purchasing large inventories to enable them to maintain output in the event that their current sources were put beyond reach in the event no exit deal is reached. If pre-purchasing continues, there will be an echo of lost demand for EU suppliers in 2019. Moreover, adding to inventories well ahead of demand will distort the financial condition of British companies, straining cash flow and deploying working capital that might be better used elsewhere.

With roughly 13 cents on the dollar sold overseas by U.S. companies, a disruption to the trade conditions in Europe – with its compounding impact on Asia – will make 2019 rockier than necessary. For companies already struggling with U.S. tariffs, the loss of more demand from around the world presents an additional hurdle.

The first quarter of 2019 will mark a full decade since the bottom of the 2007-2009 recession cycle. The U.S. economy continues to fire on all cylinders, fueled by strong consumer spending, increased business investment, virtually full employment, and a business-friendly environment. The headwinds created by tariffs, trade wars with partners, weakening global demand, growing inflation, and political uncertainty will test the power of the economic engine in 2019. There are also troubling signals in the investment markets, like the meteoric rise of defensive stocks and steep decline of economically-sensitive stocks since May 2018, or the ballooning growth in leveraged corporate and sovereign debt.

Corporate debt has risen precipitously in the years since the Great Recession because extremely low borrowing costs encouraged companies to fuel expansion with new debt. The total of outstanding corporate bonds now stands at $9 trillion, which is nearly double the amount that was outstanding in 2008. More troubling is the amount of that debt, some $2.5 trillion, which is rated BBB. In part, that’s because some of America’s steadiest blue chip companies – including IBM, General Electric and AT&T – have seen their credit ratings downgraded to BBB. Should a further downgrade occur, to junk status, these companies would see a marked increase in borrowing costs and a significant decline in the buyers of their bonds. If the economy slows and erodes corporate profits, the chances of default would also increase.

These challenges have prompted some economists to forecast a slowdown by early 2020. A survey of economists published by the Wall Street Journal on November 21, for example, found that half expected a recession by 2020 and 70 percent responded that there was a greater risk that growth would fall below forecasts in 2019. Such forecasts can be bellwethers, as the prospect of a slowdown can become a self-fulfilling prophecy for business.