Some construction trends have slowed or reversed in 2016 and among economists, there are the first signs of recession on the horizon for 2018.

The trend in the national construction outlook that seems to have reversed most clearly is the rate of multi-family development. This was not only expected but is, in some ways, overdue. Data on multi-family starts was choppy through the late summer and early fall but through November 2016, the number of apartment units started was down 4.1% year-over-year. Moreover, the number of permits for multi-family units fell 10% in November, suggesting that the pipeline of apartment projects has dwindled.

Most of the factors driving multi-family development are fading. Demographic support for apartments is weaker and home ownership among 25- to 35-year-olds is growing. Vacancy rates in apartments have been rising throughout the year and sales of apartment projects have slowed. New rules that will push borrowing costs for multi-family higher went into effect December 24, 2016 and higher interest rates in 2017 will also push valuations lower, further reducing the attraction of apartments as investment properties. That, in turn, will dampen demand for new construction in 2017. Perhaps the final nail in the coffin for multi-family (and a drag on single-family sales) was the fact that residential mobility decline to a record low in 2016, as only 11.2% of Americans moved during the year.

Although the decline in the apartment market hasn’t sparked a resurgent single-family market yet, housing starts have increased. Construction of single-family homes was up 9.% year-to-date.

The slight monthly decline that has occurred in private non-residential spending since the cyclical highs in July 2016 has coincided with a similarly slight upturn in public spending. The combination has narrowed that gap between public and private spending slightly – from $154 billion to $133 billion – for the first time since June 2015. Should the trend continue, there may finally be a reversal of what is a five-year spread between public and private spending.

Two of the more-experienced construction economists forecasted lower growth for the U.S. construction market in 2017. Speaking at the Post Election Outlook on November 17, Dr. Kermit Baker, senior resident fellow at Harvard University and chief economist for the American Institute of Architects (AIA) and Dr. Ken Simonson, chief economist for the Association of General Contractors, both predicted that construction spending would increase less than in 2016. The two were also in agreement that growth among the market sectors would be more balanced.

Simonson expressed concern that slowing job creation and stagnant business investment would weigh on manufacturing and infrastructure spending. He noted that absent an infrastructure stimulus package such as President Trump has promised, there is little chance of an increase in federal highway spending.

On the non-residential building side, Simonson forecasts $431 billion in spending in 2017, roughly 3% higher than the expected level for 2016. Within the non-residential categories Simonson sees less disparity in growth. For example, his forecast for healthcare spending is 5% higher (compared to 2.3% in 2016), while he predicts office construction will grow 7.5% (compared to 14.7%). For overall spending, Simonson forecasts a range of 2-7%, a few points lower than his forecast for the past few years. 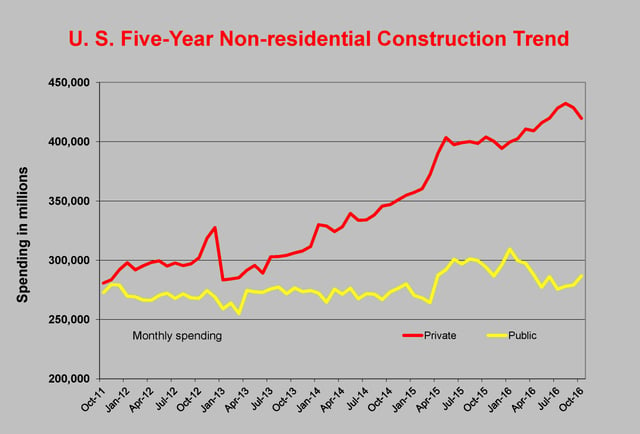 The AIA’s Kermit Baker sees little change from 2016 to 2017, forecasting construction spending that is 5.6% higher after a 5.8 gain in 2016. In his remarks, Baker compared the current spending levels to those during the trough of the recession and the pre-recession peak. Within major categories, spending has exceeded the previous peak in multi-family and commercial/industrial buildings. For institutional spending, activity in 2016 is about 14% below the previous cycle’s peak of $256 billion (and about 8% above the trough). Only single-family housing is dramatically behind the pace prior to the 2009 recession. The $237 billion in single-family construction is only 55% of the 2006 peak; however, it’s worth noting that peak was driven by demand for financial products during the housing bubble. There is little to suggest that single-family housing is going to rebound to those levels.

Both Baker and Simonson attribute the slower growth to slower overall demand for space but there is also evidence that tight labor is constraining growth as well. There is some evidence of that in the bidding market.

Architects surveyed by the AIA responded that they were having increasing difficulty in finding enough bidders for their projects and the bids were reflecting that phenomenon. As part of its monthly Architectural Billings Index, the AIA queries bidding activity. In November,
only 33.8% of the architects said they had seen no decline in the number of bids. More than 30% said they were getting fewer bids on most projects, while 35.8% saw fewer bids on some projects. Not surprisingly, almost the same ratios applied to the question of higher bids, with 36% saying they were getting higher bids on most of their projects. 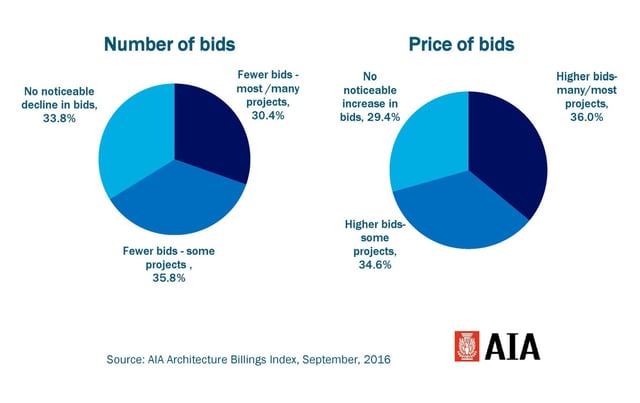 Although the presentation’s title alluded to the national election, there was little in any forecast that accounted for an impact from the change in leadership.

Impact of a New Administration

Those looking to gauge the impact of a Trump Administration would do well to wait to see what clears Congress. Judging from Trump’s limited policy exposition during the campaign, it’s difficult to infer what policies will be proposed, let alone implemented, but two that seem likely are increased spending on infrastructure and military and decreases in income taxes. Either of these should stimulate economic activity and the effect of both should boost both business and consumer spending.

Of course, there are political hurdles for each of those initiatives. Democrats can hardly oppose an infrastructure stimulus, especially since a significant increase was part of their platform, but as the opposition party there is likely to be some push back. Republicans who are fiscal conservatives may also find little to like about a big infrastructure package that is not accompanied by spending cuts, especially those who fought hard to keep the debt ceiling from increasing in 2013. In combination with smaller revenues, a program of higher spending combined with tax cuts will make it harder for fiscal conservatives to support an economic stimulus.

Politics aside, any significant program that includes higher spending and lower taxes will have an economic impact that could offset the benefits of the stimulus. When President Obama pushed through the American Recovery and Reinvestment Act of 2009 (ARRA), unemployment was near 10%. Today, the workforce is near full employment and such a boost would almost certainly create higher wages and accelerate inflation. Such an economic policy would also raise the Federal deficit by several trillion dollars. Activity in the Treasury market since Donald Trump’s election suggests that global sovereign debt investors have already priced in higher inflation by demanding higher yields to buy intermediate and long-term U.S. debt.

“Expectations of greater government spending and higher consumer spending, should tax cuts take place, would likely result in demand-pull inflation, especially given that the economy is close to full employment. Additionally, should barriers to trade increase, the result would likely be higher prices for imported goods which would eventually flow through to consumer and producer prices.”

Most economists seem to be in agreement that the best bet of success for the Trump promises is an infrastructure spending program (even though the outcome of the election has made them gun shy about predicting what the new Congress will support or oppose). Rather than focusing on how politics may impact the economy, observers are seeing slower growth potential for jobs and gross domestic product in 2017. More than a few are forecasting a downturn in the business cycle in 2018. The good news in that prediction is that there are no indicators that we are in for a recession that would be either steep or lasting.

Compared to the previous two business cycles there should be no jarring reaction to an artificial asset bubble, as occurred after the dot com and housing booms. In fact, during the recovery from the financial crisis, new construction has lagged what would be considered a “normal” rebound in residential and commercial construction. Severely tight credit and a huge inventory of homes lengthened the recovery from the mortgage crisis, although those factors helped fuel growth in apartment development. Since financing normalized and the overhanging inventory was burned off, heightened lending regulations and tepid new residential development have left the housing market under-built rather overbuilt.

Commercial properties have seen more robust growth in the past few years but completions of new buildings lagged the construction of previous cycles. New completions of office, industrial and retail space as a share of the total inventory has been falling steadily since the 1984 recovery, when completions reached nearly 5% of the total. From the cyclical trough in 2009, completions have yet to rise to 1% of the total inventory. While some of this lower level of construction can be attributed to the hangover of the crisis there are some structural issues – like the drop in office space per person or the shift in shopping from stores to online – that will keep new construction in check. 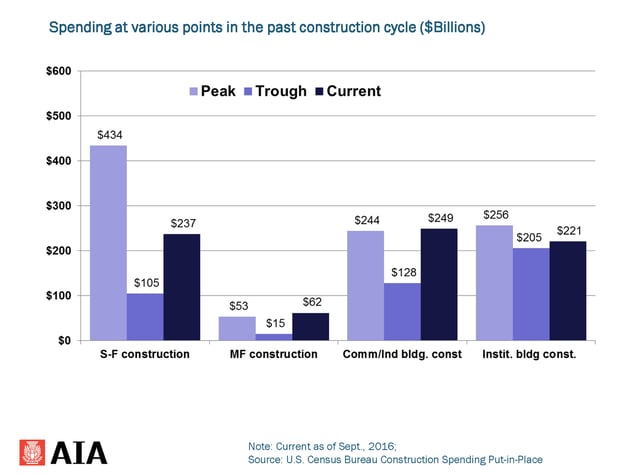 Demographic and tax revenue issues have kept the institutional sector of construction – education, healthcare and government buildings – from solid gains since the 2009 recession. If history is an indication, reinvestment in this sector will bounce back because of politics or demographic pressures; however, there is little chance that spending increases in public or hospital buildings will overheat the economy.

It is the absence of factors overheating the economy that are pointing to what should be a milder downturn in 2018, assuming the current modest growth cycle runs out of steam by then. Given the shocks that the construction industry absorbed in 2001 and 2009, such a gentle downturn would be welcome.